This article looks at the choices available to designers when it comes to selecting cellular technology to replace their 2G designs. The advent of GSM (2G) technology revolutionised the M2M & IoT market in the nineties, as companies took advantage of cellular technology to increase efficiency & effectiveness in their day to day activities.

Specific examples of this being the explosion of new services & applications in markets, such as vehicle navigation, utilities, vending, traffic control, remote monitoring and security.
This significant growth continued so that by 2017 there were estimated to be 1.8 Bn M2M & IoT connections in the world, most with applications that required low bandwidth and data rates that utilised and relied on the 2G or 3G networks. These older, established networks cost significantly less to operate than the 4G/LTE network with its higher bandwidth and fast data rates required for demanding video, speech and general ‘Smart Phone’ applications.

The difficulty this presents for Mobile Network Operators (MNO’s), is the support of three separate technologies and the effects of network efficiency, complexity, duplication & cost. As a result of this, there are a growing number of geographical locations where MNO’s have decided to stop 2G and 3G altogether, and are now concentrating their efforts on only supporting, 4G and the new emerging 5G technologies. This move by the MNO’s requires that many customers currently using the 2G & 3G network are now well advised to plan for a future without these networks being available.

The territories that have stopped supporting 2G, at the time of writing are North America, Australia, many countries in Asia and a small number in Europe. Europe, in fact, is the territory most reliant on 2G networks for M2M & IoT applications.

Predictions are that 3G, which has also been decommissioned in some parts of the world, is the technology that will be disappear first around the Globe, as Networks plan to invest heavily in 5G.

Emergence of new 4G/LTE technologies
Networks and companies, that are reliant on M2M and IoT for their existence are faced with a dilemma. For the Networks it is an issue of supporting M2M and IoT due to the amount of revenue they generate, and, for OEM companies, the conundrum is what technology to use in order to future proof their products.
The solution is the new LTE/4G technologies such as NB IoT and LTE CAT M.

There are sub divisions for each. NB IoT comes in various forms, each with its own characteristics but in short, the difference between NB IoT and LTE CAT M is that NB IoT has lower download and upload rates (in KB/s), whereas the LTE CAT M, download and upload rates, are in MBits (1 MBit/s to around 10 MBit/s).
NB IoT is mostly used for indoor applications and LTE CAT M is for outdoors.

These technologies haven’t come about by accident. 3GPP, the standards organisation that develops the protocols for mobile telephony, along with the Mobile Networks, introduced NB IoT and LTE CAT M standards and have started rolling out networks to support M2M/IoT applications.

Many Mobile Networks around the world have already started deploying NB IoT and LTE CAT M base-stations, but the deployment is currently slow, as the existing 2G networks are still there, particularly in Europe, to support M2M & IoT anyway. However, commercial pressure on the MNO’s is growing steadily, as they risk losing market share whilst exponential growth of M2M and take up of NB IoT and LTE CAT M, may leave them behind their competitors, should they not deploy the required infrastructure in a timely manner.

As of September 2019, around 150 Network operators in 70 countries have started deploying NB IoT and LTE CAT M. 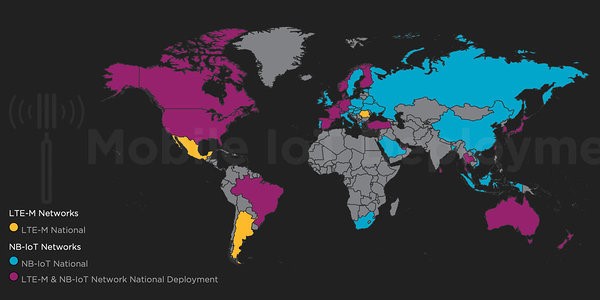 New Modems make new designs future proof
A neat solution for companies in the industrial M2M market would be to use NB IoT and LTE CAT M modems that are backward compatible with 2G. This will allow them to continue to use the 2G network and be ready to use 4G/LTE technology when the 2G Networks are switched off, and the new LTE technologies are deployed in more territories.
To assist customers with their respective current & future developments such industrial Modems already exist. A quick search on-line shows that companies such as Siretta Limited already manufacture and supply very low power NB IoT and LTE CAT M cellular modems that are also compatible with the existing 2G Networks.

Such modems are available to operate across the globe with approvals for most of the major territories of the world.

Any company concerned with the compatibility of their products with cellular networks would be best advised to start their new designs using NB IOT and LTE CAT M modems. They would in effect be able to future proof their designs for years to come.

In conclusion, the Cellular Industry has already provided a path to ensure that decommissioning their existing technologies will not adversely affect their customer base in future. Wireless equipment manufacturers like Siretta www.siretta.com with their ZETA family of modems, demonstrate that the industry is in position to support new designs that require future proofing.