To identify the ideal Industrial Router for your application we have developed the Router Selector Tool which is a configurable filter to narrow down the results to match your exact requirements.

3G refers to the third generation of cellular communication technology which was based around the global system for mobile communications standard (GSM) with improvement in speed and latency. 3G uses digital radio signals to communicate with an enhanced encoding system to improve performance over 2G.

All of the benefits of the 2G system have been incorporated in to the 3G standard including encryption, SMS, MMS and GPRS data services. The billing structure for 3G is also similar to 2G and as the data rates are higher it is possible to download more information and so the costs of the network started to reduce in line with the increases in GPRS data traffic.

The evolution of 3G has provided faster data communication services over time and the full 3G specification is called universal mobile telecommunication system (UMTS) which forms part of the the universal terrestrial radio access network (UTRAN). The original specification implemented a downlink connection speed of 384Kbit/s. Following on from the original specification the 3G standard incorporates high speed downlink packet access (HSDPA) which offered speeds up to 7.2 Mbits/s. Immediately following this was high speed uplink packet access (HSUPA) which offer uplink speeds of 5.76 Mbit/s. These standards became known as 3.5G. After HSDPA and HSUPA were established in the marketplace the UMTS network evolved to provide 3.75G otherwise known as evolved high speed pack access (HSPA+). This standard provided a theoretical downlink of 42.2Mbit/s and uplink of 22Mbit/s.

The table below shows the standard operating speeds of the differing technologies on the 3G network. 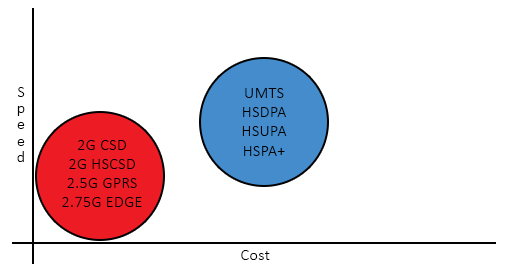 3G has always had a higher cost position compared to 2G and this is partly due to licensing costs associated with registered patents to enable voice over the UMTS network. There have been a number of enhancements made to the modules available on the market to reduce costs by removing the voice functionality. This removes the ability for the equipment to make a receive voice calls however in the IoT market space voice is not generally a requirement and therefore removing it from the end solution removes the license fee for voice and reduces costs.

As the IoT market does not necessarily require high data rates the enhancements that are brought with the 3G network are normally not needed and as a result 2G has remained the favoured solution for IoT equipment developers. One signifiant improvement offered by the 3G network over the 2G network is the network connection latency between two endpoints. This improvement means that the first byte will be received at the destination much more quickly and this means that the entire system latency will reduce. This opens the door for more real time, safety critical applications and allows for a much faster response times when sending and receiving information across the network.

As with 2G the major problem facing the 3G network is that it is being slowly phased out across the world due to newer technologies becoming available such a 4G / LTE which offer enhanced connection speeds, lower power consumption and additional user services.

The 3G network has already been scheduled to be sunset by a operators in a number of territories across the globe and many of these will be staring as early as 2019. There are plans to continue running the 3G network in certain regions until a number of specified dates going out to 2020 and 2025. However the point is that, like 2G, the 3G network will not have any more investment from any vendor and will not be being updated when cell towers go down. Therefore it is not recommended as a solution for new designs or for upgrades.