The Delta 7A primarily designed as a dual band WiFi antenna, tuned to the 2.4GHz and 5.8GHz bands also supports some of the LTE Cellular bands. The hinged joint provides a flexible means of setting the antenna into the optimum position for WiFi transmission.

The Delta 7A supports WiFi, Bluetooth, Zigbee and ISM based applications and can be used with most modern day WiFi modems that operate on the traditional 2.4GHz and extended 5.8GHz band.

The table for 4G and 5G bands lists the supported frequency bands for LTE.

The Delta 7A is supplied, as standard, with either an SMA Male or a reverse polarity SMA male connector. 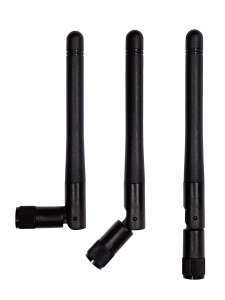