LTE NB IoT is part of the LTE specification and has been designed to offer a low power solution with a low data rate and extremely low cost which is ideal for IoT solutions. The NB IoT specification is also scheduled for 3GPP release 13 but it operates on direct sequnce spread spectrum (DSSS) rather than on the LTE network. Part of the 5G specification includes enhanced machine type communication (eMTC) which will link to the NB IoT and category M LTE standards and form the basis for the future MTC of the 5G network.

The NB IoT specification defines direct sequence spread spectrum (DSSS) and the bandwidth is limited to 250Kbit/s which means that the network can be implemented directly on to sensors which will not require a gateway device to push to the cloud. This will drastically reduce the cost of the network installation.

There are several significant advantages of NB IoT. 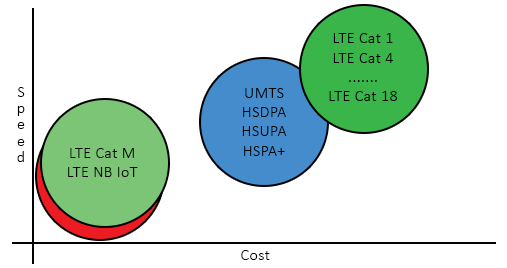 LTE NB IoT is not compatible with the existing LTE infrastructure as it operates on DSSS therefore the network providers need to update their hardware infrsructure to support NB IoT. This hardware is required to be installed at each cell tower and as such the cost to the network provider for NB IoT is significantly higher than for category M which requires a software update specified in release 13 to  be rolled out over the next few years in each region.

As a result LTE NB IoT and category M are being implemented independently by each network provider in each region accross the globe. Depending on the network operators strategy defines if they are gong to support NB IoT or category M only or support both i neach region.