To identify the ideal Industrial Router for your application we have developed the Router Selector Tool which is a configurable filter to narrow down the results to match your exact requirements.

4G refers to the fourth generation of cellular communication technology which supersedes the global system for mobile communications standard (GSM) and high speed packet access (HSPA) standards. It offers massive improvements in data throughput and reduced latency over 2G and 3G networks as it is entirely IP based. As 4G is IP based it no longer supports circuit switched network nodes and therefore the base stations only need to support IP traffic which means that all 4G voice traffic is sent over the IP infrastructure. 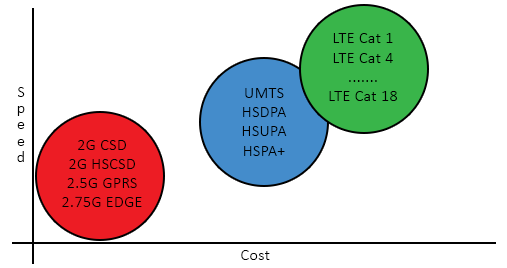 As the IoT market does not necessarily require high data rates, the enhancements that are brought with the 4G network are normally not needed and as a result 2G has remained the favoured solution for IoT equipment developers. As with 3G a signifiant improvement offered by the 4G network over the 2G network is the network connection latency between two endpoints. This improvement means that the first byte will be received at the destination much more quickly and this means that the entire system latency will reduce. This opens the door for more real time, safety critical applications and allows for a much faster response times when sending and receiving information across the network.

Unlike 2G and 3G networks, the 4G network is being invested in heavily to provide more global coverage as well as further development of the new 3GPP version releases. In addition to this investment is being provided for category M and category NB IoT which offer lower speed connections designed for direct 2G network replacement.

The table below shows all of the defined bands and the associated frequencies used with 4G / LTE network.