The Tango 22A combines 3 separate antennas into one compact and low profile package, capable of 2G, 3G, 4G WiFi & GNSS. Designed for users who want an ‘all-in-one’ antenna rather than having to install three separate antennas.

The 2G antenna is quad band, so frequencies from 698 to 960Mhz and 1710 to 2700MHz are covered, allowing this antenna to be used worldwide for all cellular operators on 2G and 3G networks.

The GPS/GNSS antenna has a wide-band from 1561 to 1602MHz to cover the 3 positioning satellite systems; Galileo, GPS and GLONASS maximising the ability for an application to obtain a position fix and tracking data.

The Tango 22A is commonly used with applications such as automotive tracking, vending machines, energy metering and many more. The low profile design and screw mount base makes the Tango 22A suited to environments where it needs to be less noticeable. 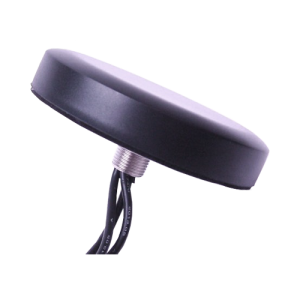 Alternative cable lengths and connector types can be specified for volume orders.