The Internet of Things has been evolving and developing over the last couple of decades. Early deployments used 28Kb analogue modems or 2G cellular to enable basic control and/or reporting with a focus towards small to medium scale deployments. More latterly we have experienced rapid expansion with a mass of integrated and interconnected things. It is estimated that there are some 17B connections globally (this number includes smartphones, tablets and laptops) of which 7B relate purely to the IoT almost a 1:1 ratio with the global population. 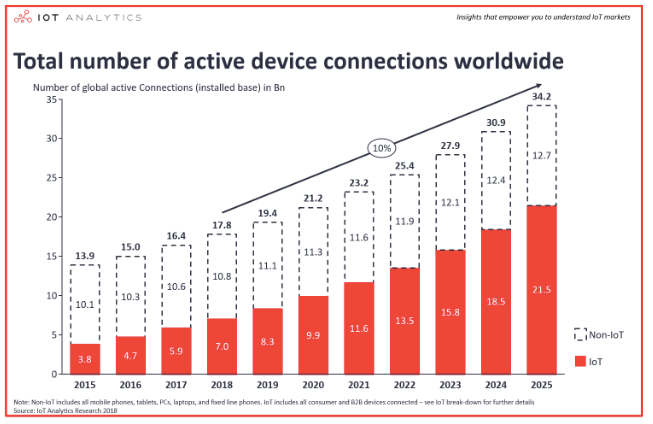 2018 estimates show that IoT connections will represent 39% of all connected devices, whereas by 2025 it is forecast to reach 21.5B IoT connections 63% of all connected devices on a global basis. The technological advancements that have been seen from M2M to 5G has proved to be the catalysts for growth with NB-IoT and   CAT-M anticipated to fuel the next acceleration

From a users perspective the basic principal of IoT remains unchanged, move small amounts of data from many sources to a central point as cost effectively as possible in order to analyse and adjust outcomes. LPWaN offers low cost and low power whereas cellular options such as 4G and LTE networks traditionally consumed too much power and charged higher costs for data.

Historically the mobile network providers remained more focussed on voice and video as higher data rate requirements drove higher returns. The estimated growth in IoT connections over the next five years has awoken these corporate giants and they are looking to become the bedrock within the IoT. With IoT use cases requiring analysis of more and more data real time the network providers through LTE and the 5G role out believe their solutions will become the de facto choice as low latency and gigabit capacity needs rise. However, the unlicensed Sub Ghz solutions believe that they will remain the lowest cost option and that their current footprints are expanding at a rate which means that even when the LTE/5G solutions become available they will have the majority share of the market. History shows that market share can trump technological advancement.

For those of you at certain age you may remember the battles between VHS, Betamax and Video disks or between Sky and BSB, it is obvious that some standards will become extinct in time, today both groups are aiming to be the survivor. The battle for commercial customers appears to be focusing more around a licensed or unlicensed approach with the latter being noisier, and less controllable. The balance of this article focuses on the leading technologies and the choices you need to consider during your deployment stage.

LTE (long term evolution) or 4G is the most current cellular network and is available in most countries, unlike 2G or 3G it does not have one global standard frequency but operates in three areas with some overlap across the 27 frequency bands deployed. Devices need to be regionally approved across  North America, Europe or Asia as it is not possible to have the 27 bands in one device.

The 3GPP who standardised the 3G network also control the standards for LTE and manufacturers need to pay a license fee to them to gain approval.

As can be seen by the chart below not all standards have been finally released although the key areas for IoT have been defined with CAT-M at 1Mb/s, LTE-NB1 at 250Kb/s and EC-GSM-IOT at 474kb/s.

These versions are all generically labelled as LTE, when in fact NB is a different radio system. CAT-M is a traditional Time Domain (TDD) radio albeit with reduced power consumption achieved by dropping off the network in quiet periods yet still maintaining its registration. NB-IoT uses a Digital Spread spectrum (DSSS) radio, it is a non gateway communication (lower cost solution) but utilises the cellular backbone for aggregation and the collection of data. NB-IoT is primarily aimed at localised indoor Networks.

Consideration needs to be given to the availability of hardware when considering your deployment. Across the module manufacturers there is available from at least 4 for CAT-M1 modules, 3 are producing CAT NB-1, although at the date of this article no specific EC-GSM (extended coverage GSM) appears available which we believe is due to the need for networks to upgrade existing 2G, 3G and 4G to allow this standard to be implemented.

The hardware cost of LTE modules will initially be higher than that of the old 2G solutions due to the added complexity of the device and the 3GPP license; in addition due to increased data rates and lower latency the apparent cost of data will increase. On the previous networks, data rates were relatively low at around 12 to 20 kb and charged accordingly. LTE has a capability of higher data rates and for a number of current deployments this may appear overkill although consideration needs to be given to users future analytical needs, enhanced real time access, and as a licensed solution downtime and noise across the network are minimised. It will be up to the user to define the most cost effective solution to meet their business needs.

LoRa: Designed by Semtech and promoted through the LoRa Alliance. Available in 868Mhz ,915Mhz, 433Mhz and 169Mhz on a sole manufacture chipset which provides star network topology using the internet as a backbone infrastructure.

With very low power consumption a long distance asynchronous low FSK data rate network can be delivered with range of 10km in rural locations with in the region of 10K nodes.  The signal has high immunity to near and adjacent channel interference and the cost of ownership is relatively low mainly down to the cost of the hardware, assuming the use of existing internet infrastructure.

The take up of LoRa has been initially slow although continues to gain momentum, users now have the choice of personal private networks or one of the many national services. LoRa is now deployed in 100 countries across the globe.

Sigfox: Designed by a French Network company it utilises phase shift keying (DBPSK) to achieve a low power star network. The chipset is available through 3 manufacturers and a number of modules are currently available in the market. It has a limited offset bi-directional low data rate transmission and can be deployed only through registered networks. Coverage is most of Europe, North and South America and Australia, a total of 50 countries. The networks have a defined upload message of 140 characters each of which can carry 100bytes of information.

Weightless: Offers a true open standard approach. Initially there where 3 standards developed by the SIG (Bluetooth group) Weightless P,W and N. Weightless P is now the preferred standard and is deployed in 40 countries by around 100 companies. The transmission is across all ISM bands and has a payload of around 200Bp/s utilising time synchronised base stations it is bi-directional and adapts to network capacity by adjusting the available data rate. Unlike LoRa and Sigfox, Weightless-P can support licensed spectrum operation in licensed bands without any protocol changes which arguable offers better reliability than LoRa and Sigfox.

So what choices should you consider for your deployment. The table below highlights some of the critical aspects:

Selection will depend on personal needs, if you have many customers globally then CAT-M is likely your choice. If you produce bespoke products in geographically small areas then LoRa or SigFox would be a better selection, for small indoor enclosed areas then NB-IoT.

Choosing between an Narrowband Technology and a Cellular based solution will always involve compromise and be biased towards use case as all have benefits and all have limitations. NB IoT and Cat-M offer reliability of services, larger data rates and lower latency however, with higher performance comes higher cost. Licence exempt bands will typically offer a low cost and lower power technology with a degree of performance compromise vs. NB-IoT and Cat-M; that said there are strong arguments from the network providers to suggest the cost of deploying their solutions will be comparable in the short term. The coming of 5G will not make this issue any clearer.

In answering the question which solution is best the answer is always “it depends”.

The emergence of the cellular networks into the IoT space through NB-IoT and Cat-M does look irresistible for commercial, volume based deployments. Supporters of the unlicensed sub GHz approach which believe that the cellular solution is costly are likely to be proved wrong. Mobile operators have significant customer bases and as such economies of scale will be achieved as interest in the technology grows.

Additionally the unlicensed spectrum supporters argue the cost of infrastructure to launch a cellular solution could be prohibitive, however opinions differ. Vodafone stated that “90% of their base stations use single RAN technology and therefore will require only a software upgrade to support NB-IoT”, this needs a little more investigation. Cat M is part of the LTE infrastructure and is defined in the LTE spec and uses the same channels but with lower bandwidth. NB IoT is not part of the original LTE spec and is not compatible with LTE as it stands today. Cat M appears easy to implement whereas NB IoT comes with more complexity and will take more effort to implement. Telefonica in a recent presentation stated they planned to roll out Cat M over the next 12 months with a software update and NB IoT over the next 4 years due to the increased complexity. What we can be assured of is that the mobile operators have the desire and the investment available to make an impact in the IoT.

The rollout for many countries will start with cat M and move to NB IoT as the networks provide support for NB IoT. Siretta are perfectly positioned to support the industrial IoT helping to design your solution and have been providing custom solutions for over a decade within the IoT application space. With a focus on emerging technologies they already offer a number of product solutions for cellular IoT deployment through their ZETA range of products.

One of Siretta’s new ZETA offerings is an ultra low power industrial modem which supports both LTE Cat M and LTE Cat NB IoT, whilst also providing 2G/GSM fallback. These features make this a particularly attractive solution for customers with industrial IoT applications where extremely low power, low data rates and low bandwidth are key factors. This might include applications which are required to run on battery power for long periods of time or solar powered solutions which operate away from a permanent power source.

Siretta is your partner of choice when considering your next deployment with extensive knowledge and experience within IoT focused on cellular technologies in support of 2G (GPRS), 3G (UMTS), 4G (LTE), NB-IoT and LTE Category M. Their Design team is made up of experienced industry professionals with expertise in hardware design, software development, system integration, production engineering and overall project management & delivery.