Around a decade ago the primary communication method for M2M (Machine to Machine) was via text messages on the 2G network, mobile phones were the size of house bricks and the internet carried through 22k modems. Following the same principles of Moore’s Law, the evolution of mobile communications and in particular the mobile networks has resulted in enhanced data rates, faster speeds and live streaming. The thirst for content to be instantly available and to be as close to real time as possible has never been greater. The demand for connected devices creating a global nervous system of shared data and events grows by the hour, these demands dictating further technological advancements beyond the current solutions available, resulting in the sun setting on 2G and 3G as the mass deployment of 5G networks moves ever closer.

It’s hardly surprising that network providers like Vodafone , Deutsche Telekom and AT&T had been forecasting the demise of 2G networks for several years as their focus was voice and video through the consumer market. However, their realisation now that 35% of 2G traffic relates to data flows for IoT has clearly awoken their interest in participating and monetising within this sector.

The sunset of 2G has now had a reprieve based on the usage data and we are likely to see 3G fade at a faster rate, but not in the US. AT&T and Verizon have closed that door, but in Europe and Asia predictions are now that it will continue for the mid term. Good news for the many metering and vending companies that have deployed and rely on 2G solutions.

Network providers ideally do not want to invest in legacy technology however given the importance of 2G they cannot afford to turn their back on it, so what plans are in place for the medium term to ensure that ultimately there can be a migration from this legacy solution? The answer is LTE and 5G, which offer good financial and spectral reasons to invest. The conflict between what the networks want and the needs of industrial IoT continues albeit with a closer understanding of their respective challenges.

High speed digital networks offer higher bandwidths, lower power, and are cost effective to maintain and run. They attract a younger audience who are willing to pay for features – perfect if you look to sell data by the Mb. In industrial IoT, typically you are looking for small bits of data to travel from many locations to a central point with the lowest possible cost structure. Speed and bandwidth apart from a few exceptions remain negligible.

Mobile network providers working with 3GPP set about producing specifications for 4G networks using LTE, a pure data service that provides the benefits of high speed and low power, just what the networks had intended to attract the consumer market and social media.

During the standardisation process for LTE, it was realised that there was a need for lower data rates to meet the demands of IoT. Release 13 (June 2016) of the 3GPP specification included a new standard specifically for industrial IoT.

Deployment of the new standard has yet to be completed as it remains dependent on local network operators installing base station equipment and module manufacturers releasing suitable end node devices. Some believe that as the current 2G network takes most of this existing traffic the level of urgency is low; this view may well impact their market share and position as the exponential growth within IoT over the near term will be more aligned to the evolution of newer protocols such as NB-IoT.

Regional deployment of the various standards across the globe differs.

China mobile have an installed parking system in Wuxi using NB-IoT, Athens Greece have a similar system installed, Vodafone, O2 and Deutsche Telekom have all been testing and adopted NB-IoT whilst still continuing to maintain 2G networks. So it seems that both options will be available for some time to come, nevertheless in the long term, NB-IoT is set to become the preferred solution for the network operators.

Unless you are based in the US, you will be able to continue with 2G for some time. In the rest of the world you have the option of both 2G and NB-IoT. Many devices are now being designed for NB-IoT with a 2G fall back to ensure that new designs are positioned for the future. Assuming you are in the latter, your choice may be dependent on power consumption or cost and the availability of products. Within the IoT, there are currently no shortage of manufacturers building fully licensed and certified products and unless you are deploying in very high volumes, it remains prohibitive to build from the component level due to license and certification costs.

Power consumption always remains a consideration. The power consumed by 2G and 4G is significant. It is not dependent on the type of transmission but more on the usable signal range. GSM requires a stronger signal than LTE. This is down to improvements in technology. We now have improved error correction, more efficient PA’s and more sensitive receivers, all helping to improve the overall link efficiency.

LTE is 4x the performance of 2G.

If we reduce the bandwidth for LTE NB-IoT then we also increase the performance.

The 3GPP specification not only reduces the bandwidth, it also reverts to half duplex and increased latency, the roaming function is removed which adds up to a very slim transmission method; when coupled with the greater performance of LTE the general performance and power over 2G systems will be considerable.

When considering the spectrum, most radio designers are aware that it remains a very crowded place. It is in all our interests to reduce the usage for future services but to minimise background noise in the environment. 2G uses 30khz to 200khz bandwidth at a range of frequencies 850/900/1700/1900Mhz. It is a TDMA (Time Domain Multiple Access) signal and a half duplex service.

Within LTE and depending on which of the 20 plus frequencies are allocated, bandwidths up to 60Mhz are used. LTE is full duplex and uses 2 frequencies for up and down links these are divided by ‘Guard’ bands. Both FDD (Frequency Division Duplex) and TDD (Time Division Duplex).

LTE NB-IoT in comparison can use the same frequencies as full LTE but is half duplex and only requires one frequency, it can also use TDD signals in the Guard Bands more efficiently using the spectrum.

Over time and with the phasing out of 2G, the use of NB-IoT will free up space within the spectrum.

Also, under the 3GPP release 13 in 2016 another standard was included – LTE Cat M – and like NB-IoT it is a sub set of the LTE standard. 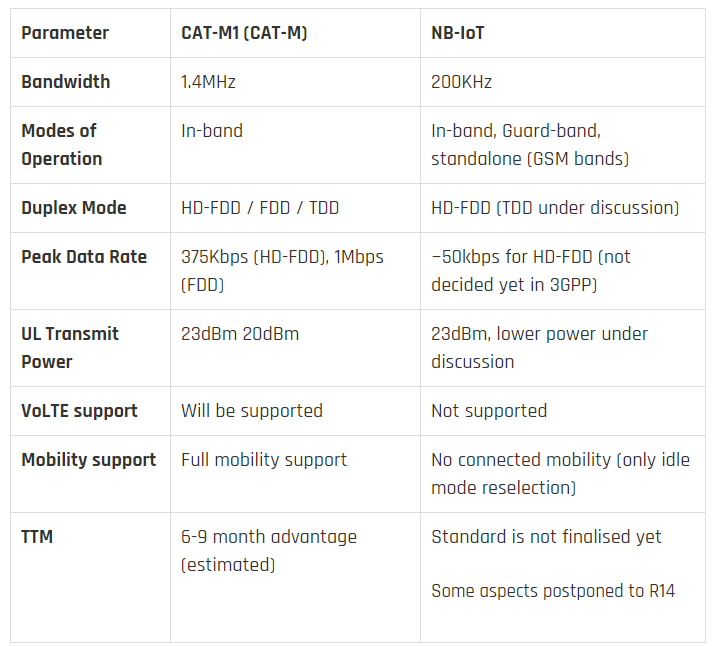 LTE Cat M has some differences to NB-IoT with a wider bandwidth of 1.4Mhz, however, the higher data rates possibly removes the ability to use the GSM bands. In addition the higher data rates and bandwidth, it allows VoLTE (Voice over LTE). The power level on both standards are virtually the same. LTE Cat M also supports roaming which is not available in NB-IoT. Currently both standards are being promoted by the network operators.

Both NB-IoT and LTE Cat M have advanced radio design which gives up to 4x the power efficiency. Currently NB-IoT will deploy faster and is the best choice for fixed location devices like remote water pumping station, parking and utility meters. LTE Cat M has the added benefit of roaming and voice, this makes it better suited to robot equipment, fire and security with voice alarms etc.

If you have existing 2G installations there is no immediate panic to redesign, however, for new designs the power and spectrum advantages make the choice of NB-IoT or LTE Cat M good sense. The decision between these 2 comes down to the type of product and requirements for data rate, roaming ability and power/battery life. The 2G networks in Europe and Asia will continue for some time nevertheless, the migration has begun, and Siretta are perfectly positioned to ensure your deployments and proof of concepts are future proofed.