For those of you in attendance, you would be forgiven for feeling that this years Mobile World Congress in Barcelona seemed to be principally focused on the acceleration of the 5G role out and its standards.  Nonetheless, it was only fairly recently that the benefits of 4G/LTE was introduced, and if like many at the congress your focus is within the IoT rather than voice and video, you would be forgiven for questioning its impact on your existing or future IoT deployments, as standards such as 2G/3G and 4G have their place and enthusiasts. The inevitable sun setting of 2G and 3G adds to the uncertainty being experienced within IoT.

3G was first released in Japan in March 2001 as a new UMTS (Universal Mobile Telecommunications Service) standard which was ratified by the 3GPP (3rd Generation Partnership Project) and included benchmarks for speed and reliability. The minimum requirement is a data rate of 200kb/s which became the standard for Europe, Japan and China. WCDMA (Wide Band Code Division Multiplex) still remains the most shared radio across the globe. In China TD-SCDMA (Time Division Multiplex) and in North America and South Korea CDMA (Code Division Multiplex) are used. Although a global standard exists, it does not mean all devices can talk to each other. Nonetheless, all of these radio systems are based on Spread Spectrum transmission.

WCDMA is the most common version deployed on 2100Mhz in all regions, but can also be available on the 850,900 and 1900Mhz frequencies. With several upgrades to the original standard, the latest being HSPA+ (High Speed Packet Access), theoretical data rates up to 168Mb/s upload and 22Mb/s download can be obtained. This is achieved by using enhanced radio components and Multi Carrier Transmission. Evolving from the original standard, CDMA2000 is now deployed in North America, China, India, Pakistan, Japan, South Korea, Southeast Asia, Europe and Africa.

The spectrum use for 3G is significantly higher than 2G and the amount of bandwidth needed for 3G services could be as much as 15-20Mhz, whereas for 2G, a bandwidth of 30-200 KHz is required. However many new services are available from 3G which were out of scope for 2G, for example:

LTE Cat 1 is the initial release of LTE or Long term Evolution, a 3GPP specification similar to 3G in its use of UMTS/HSPA. It is downward compatible to GSM GPRS/EDGE; LTE Cat 1 uses a different radio interface promoting network improvements. It is the upgrade path from 3G for UMTS and CDMA2000.

Different LTE frequencies make LTE Cat 1 available globally, however it is impractical to build one device covering all bands and frequencies as currently there are a total of 80 variants. Module manufacturers are currently focused on producing 2 version, either America plus or Europe Plus to enable as many regions as possible as the physical limitation is 7 bands.

The main objective for LTE was to increase the capacity and speed of the networks, bringing advances in streaming and video functionality.

Consideration needs to be given to the radio interface which comes in 2 versions; FDD (Frequency Division Multiplex) and TDD (Time Division Multiplex ). The major differences between TDD and FDD is how data is uploaded and downloaded, and at what frequency the networks are deployed. While FDD uses paired frequencies to upload and download data, TDD uses a single frequency, alternating between uploading and downloading data through time either half duplex or full duplex.

A key upgrade from 3G making networks more efficient was the move away from circuit switched to packet switched an all IP network. This means some voice and analogue services will need to be fallback switched CSFB (Circuit Switch Fallback), however, this enables voice over IP and services like digital TV.

For IoT designs, the key advantage of using LTE is the higher bandwidths enabling the use of browser based systems and the employment of higher programming languages such as JAVA script. With the move towards IoT Sensor hubs, this will enable nodes and the integration of many end point node systems with direct display integration. The move to IP based networks on LTE makes this more user friendly. 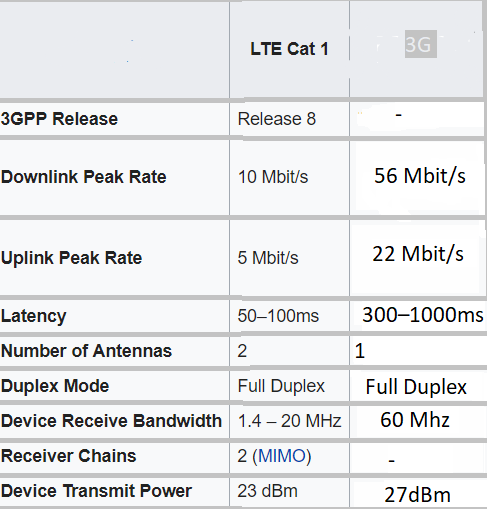 As you can see above, the decision on whether to use 3G or LTE Cat 1 is very inexact. Power consumption is dependent on fixed or roaming. Data rates on 3G appear higher, but when latency is taken into account this can negate speed and the 3G bandwidth is subject to regional availability.

With the advent of 5G, the network operators are starting to look at redundancy. A reprieve of 2G is the most likely outcome making it more probable that the network operators will focus on sun setting 3G as the newer networks are IP based and more cost effective than analogue solutions supporting longevity for 4G/LTE.

For IoT applications, the main motive to migrate from 2G to 3G was the ability to use Java applications, 4G is better suited as it is IP based. If you need to use Analogue voice then 3G offers better performance as it continues the circuit switched service. For global product applications, 3G has the advantage of one frequency 2100Mhz, whereas LTE has a large number of bands and frequencies requiring regional products.

Today, both technologies are established and network availability is good. Products for 3G usually have a 3 or 4 function radio, whilst 4G modules have up to 7, making the 3G modules more cost effective today. However, with the risk of obsolesce looming consideration needs to be given to future proofing through LTE Cat 1.

Siretta are perfectly positioned to ensure your deployments and PoC’s (proof of concepts) are future proofed. The ZETA modem range contains LTE Cat 1 modems, LTE Cat M and NB-IoT modems, both occupying the same footprint as previous ZETA models, so choices can be made today for planned installations in the future.

Our design team is made up of experienced industry professionals with expertise in hardware design, software development, system integration, production engineering and overall project management & delivery.